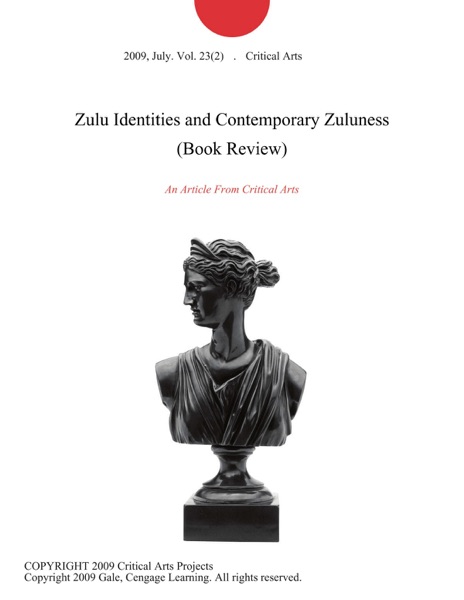 Carton, B., Laband, J. and Sithole, J., eds. 2008. Zulu identities: being Zulu, past and present. Scottsville: University of KwaZulu-Natal Press. (ISBN: 978-1-86914-154-7, pp. 633) Zulu identities is a timely tome that helps to place the multifarious idea of Zuluness at the centre of contemporary 21st-century discourses about identity politics in postapartheid/postcolonial South Africa. The book attempts to give attention to all possible socio-political, historical, symbolic and archetypical facets of Zulu cultural life for both the individual and the group. Zulu identities demystifies the notion of a ‘unitary’ Zuluness. Zuluness is established as a site of imagination, cognition and expression in everyday life. Each chapter is a vignette contributing to the complex, multifaceted and fluctuating patterns of contemporary Zuluness, and both the direct and tenuous forces that cause its articulation by a diverse number of individuals and social groups across gender, race, class, ethnicity and age. Indeed, there are manifestations of Zuluness over and above the basic essentialist parameters of biological or genetic classification; this manifestation of Zuluness is both a feeling and a consciousness of being Zulu, if not for a fleeting moment as one emulates certain Zulu-associated attributes and then incorporates these into one’s own existential practices, even though one is not biologically necessarily from the Zulu ethnic group per se. This means while Zuluness is ‘imagined’ it is ‘real’ because people believe in it and their behaviour and attitudes are influenced by it.