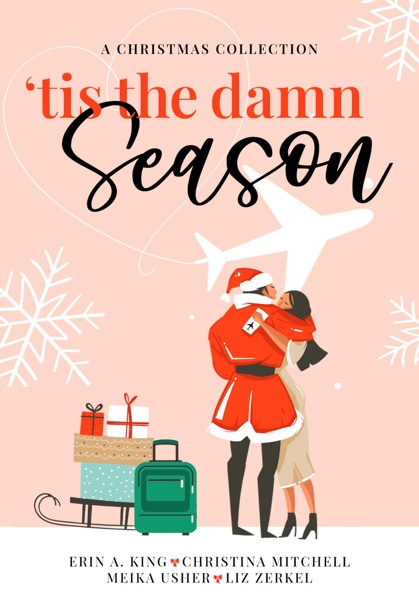 Zoe Monroe hasn’t seen her younger sister on their shared Christmas Eve birthday in five years. When a blizzard strands her at the airport on December 23rd, it looks like this year will be no different. Fortunately, a sexy stranger in a Santa suit offers to share the last available hotel room with her. While he’s not who she’d planned to spend her Christmas with, she can’t deny that he jingles her bells. Maybe this year, she’ll make sure she ends up on Santa’s naughty list…

The only thing Gabriel Tilki wants for Christmas is for it to be over. What used to be the security guard’s favorite time of year now just makes his heart ache. But a winter storm and a chance encounter with a charming, disheveled mental health influencer might just be what he needs to get his Christmas back. And maybe in return, he can give her the Christmas she’s never had.

A road trip with a hot stranger was NOT on Jane Archer’s Christmas list this year. But when a massive blizzard shuts down airports across the entire Midwest, how else is she supposed to get home for the holidays? As the miles pass beneath the wheels of their tiny rental car, Jane begins to wonder if this brash, bold woman in the driver’s seat isn’t exactly what she wanted for Christmas…

Mae Thompson needs some Christmas magic. As if losing her job right before the holidays wasn’t bad enough, a Midwestern blizzard strands her in the wrong city with the very man who annoyed her for the entire flight. And the entire cab ride to her hotel. And at the hotel. Since the universe keeps throwing Mae and Lon together, they stop fighting it—and each other—and decide to make this a Christmas to remember.