The Woman in the American Family 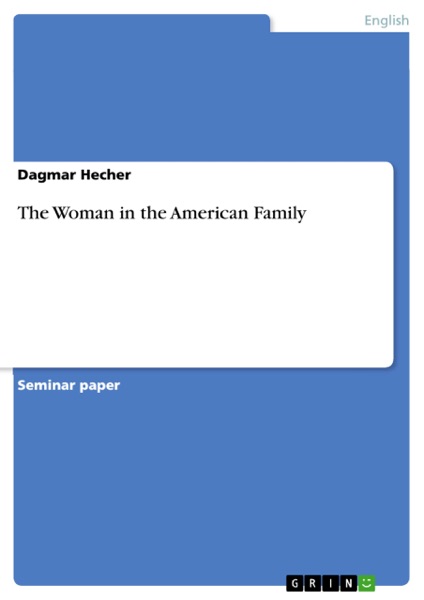 Charlotte Perkins Gilman published her short storyThe Yellow Wallpaperat a time when women’s destiny was to bear children and to enjoy the pleasures of motherhood. In a typical marriage of the time it was understood that the wife would give birth to a child within the first year and a half of the marriage. Furthermore, the total fertility rate of white women in 1890 was 3.87, and one even has to mention here that this number was a result of an already marked decrease of fertility during the preceding century. If one compares this number to the average of 1.3 to 1.4 children a modern woman these days gives birth to, it becomes clear that in 1892 there was still a tremendously strong focus on motherhood as a woman’s ultimate goal in life.
As a contradiction to the expectations of society then, pregnancy and childbearing then was not a blessing to many women, including Charlotte Perkins Gilman, but a frightening mystery which they totally lacked guidance through, as women were thought to be instinctively able to handle this new situation on their own. “…as recently as the 1950s it was not considered polite for obviously pregnant women to appear in public places more than was absolutely necessary.” (Degler, 59) The fact that pregnant women were supposed to hide themselves from the environment as far as possible in order not to be considered indecent further increased the mystification and isolation going along with pregnancy and childbearing. Additionally, the doubled pressure of being wife and mother – with all the duties included – all of a sudden was too much for many women. The challenge of adaptation to this new stressful situation often led and still leads young mothers to the so called “post-natal depression”, which is a central theme inThe Yellow Wallpaper.This special kind of depression can occur within the first year after having given birth to a child and usually goes along with deep sadness, fatigue, crying fits, insomnia, fear, panic attacks, indifferent feelings towards the child – “And yet I cannot be with him, it makes me so nervous” (Gilman, 14) – and anankastic angst, depending of the severity of the depression. Nowadays, this depression can easily be cured, but in the nineteenth century doctors tended to diagnose such women with hysteria and prescribe total tranquility and silence. This is the case with the main protagonist in Gilman’s short story The Yellow Wallpaper. […]