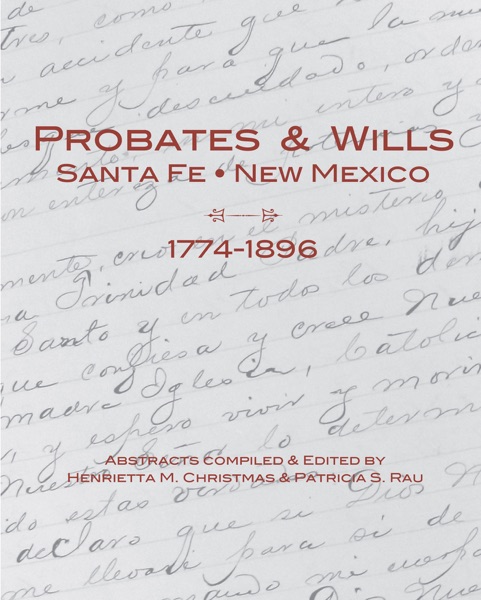 Containing abstracts of wills from 1774 – 1896, this book covers three governmental time periods in the history of New Mexico – Colonial, Mexican, and Territorial. The early Colonial Spaniards made their wills in a more elaborate fashion, as compared to the Mexican Period of New Mexico which showed less flourish but still maintain the same detail; and Territorial wills which left out more of the religious pieces, but kept the minor details of their estates. These abstracts are from Book “E” of the Santa Fe County, New Mexico, Probate and Will Books, located at the New Mexico State Records Center and Archives in Santa Fe, New Mexico.The earliest wills were probated much later from 1877-1897, as their families needed to deed property in their own names. The represent a broad range of wealth, such as the deceased person’s house, land, and animals, to personal property which could be clothing, jewelry, weapons, etc. Items used for day-to-day work play a large part in these wills. Women’s rights were upheld in terms of property they owned and could pass on as inheritance to their children, as evidenced in these wills.