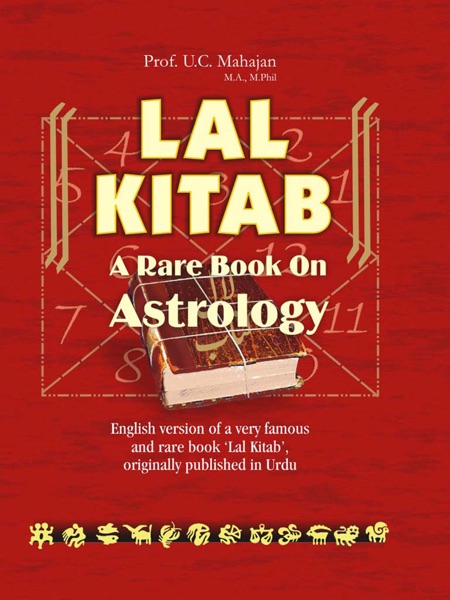 A book on Astrology, Horoscope Reading Made Easy was published in 2000 by Pustak Mahal, authored by Prof. U.C. Mahajan.

This English version of Lal Kitab is an extension of the earlier book and both complement each other.

Renowned astrologer Roop Lal had, in fact,written Lal Kitab in Urdu, during the 19th century, based on an ancient text.This rare book was popular in north-west India, Pakistan, Iran and many other countries.

The English version of Lal Kitab, written by Prof. U.C. Mahajan, has added new dimensions to make it more lucid and easier to understand for common people.

The salient features of this book are:

• Every planet has a benefic or malefic effect according to its raashi and placement in a particular house.

For example, Jupiter in house No.1 can exercise good or bad effects according to its nature, whether excellent or debilitating.

Consequently, the author has classified the effect of every planet good or bad separately.

The earlier book carried a generalised interpretation. Now, readers will find it easy to comprehend the effect of every planet.

• More case studies have been added to make it broad-based.

• Preparation of birth chart according to south Indian traditions has also been included.

His interest in Astrology began at his ancestral place in 1990, when he came across Lal Kitab two rare books on Astrology in Urdu.

Since then, he has not only mastered the finest nuances of these books and other ancient texts but also adopted Astrology as his hobby.

His first book on Astrology, Horoscope Reading Made Easy, published by Pustak Mahal has been widely acclaimed.

Encouraged by the tremendous response, he has written this second book.

This book is a complete one on Astrology and has been written in a lucid and easy-to-comprehend style.

It is an astrological ready reckoner of sorts in which every aspect is explained in depth.