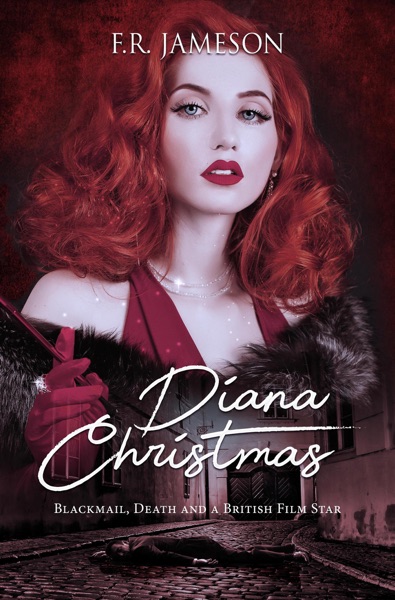 He’s been threatened, beaten and broken – but still he doesn’t regret meeting the actress who disappeared…

Their attraction is instant. Between the sheets, Diana tells him of the blackmail and betrayal which ruined her. And how – even now – she’s being tormented.

Emboldened, Michael sets out on a mission to track down a compromising roll of film – unaware that around the next corner lurks deadly peril.

Can Michael save Diana from her past? Or will the secrets which crushed her life destroy them both?

Diana Christmas: Blackmail, Death and a British Film Star is a must-read for all fans of hard-boiled crime and film noir. If you love the thrillers of Megan Abbott, Guy Bolton and James Ellroy, then you will adore Diana Christmas!

EXTRACT FROM AN INTERVIEW WITH F.R. JAMESON:

What or who inspired you to write Diana Christmas?
I love L.A. Noir novels and books about the sordid underside of Hollywood. (I’m a big fan of the ‘You Must Remember This’ podcast.) I think, ideally, I’d have written a Hollywood-set story myself. But since I’ve only been to the place once and very briefly, there’s no way I could realistically become a chronicler of it. Then one day the idea occurred to me that Britain had a film industry as well. Smaller and more parochial, but there it was with its own studios and stars. From there, everything fell into place.

Do you have any fellow authors you look up to? If so, why?
Raymond Chandler has always been a touchstone of mine, and even though I’ve not read any of his books for years, I still think of them constantly and can even quote them. Given my love of Hollywood Noir, you won’t be surprised to hear that I’m a fan of both Megan Abbott and James Ellroy; both of whom influenced this novel – Megan Abbott in particular. While from the British crime writers, I’ll always champion Barbara Vine – which was what Ruth Rendell called herself when she was having her darker and more weird moments. She produced a number of underrated, but must-read books.

What was the most challenging thing about writing the book?
It’s a period piece, so I suppose like anyone writing something in bygone years, I was constantly worried about capturing the period correctly; about not putting in some dreadful anachronism. But I also had sleepless nights about capturing the characters properly. The character of Diana, in particular. I wanted to make her convincing all the way through, and a lot of time was spent thinking about her psychology. Hopefully I’ve succeeded, or – at least – got pretty close to succeeding. You decide!

GET STARTED READING DIANA CHRISTMAS WITH JUST ONE CLICK!